The single-source paths problem asks for a solution that contains the shortest path from a given vertex to all the other vertices.

The algorithm consists of two major steps: an initialization step and a computation step 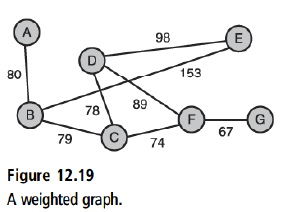 SOME EXERCISES FOR DEVELOPING A GRAPH COLLECTION

4、Graphs have two common implementations. An adjacency matrix implementation of a graph with N vertices uses a two-dimensional grid G with N rows and N columns. The cell G[i][j] contains 1 if there is an edge from vertex i to vertex j in the graph. Otherwise, there is no edge, and that cell contains 0. This implementation wastes memory if not all the vertices are connected.

5、An adjacency list implementation of a graph with N vertices uses an array of N linked lists. The ith linked list contains a node for vertex j if and only if there is an edge from vertex i to vertex j.

7、.A spanning tree has the fewest number of edges possible and still retains a connection between all the vertices in a graph. A minimum spanning tree is a spanning tree whose edges contain the minimum weights possible.

8、A topological sort generates a sequence of vertices in a directed acyclic graph.

9、The single-source shortest path problem asks for a solution that contains the shortest paths from a given vertex to all the other vertices.

GRAPHSMathematically, a graph is a set V of vertices and a set E of edges, such that each edge in E connects two of the vertices in Y.The term node is also used here as a synonym for vertex.Two common representations of graphs:the adjacency matrix repr

When to Use What Data Structures

原文： http://stackoverflow.com/questions/371371/serialize-data-structures-in-c I'd like a C library that can serialize my data structur

Getting Started with Data Structures

I've received a few PM's over the last couple weeks with requests asking how to get started learning data structures. This entry w

What are the lesser known but useful data structures?

Introduction to graphs and their data structures Section II[翻译]

Introduction to graphs and their data structures Section III[翻译]

Introduction to graphs and their data structures Section I[翻译]

全书目录By Brad Miller and David Ranum, Luther CollegeAssignments1. Introduction 1.1. Objectives 1.2. Getting Started 1.3. What Is Computer Science? 1.4. What Is Programming? 1.5. Why Study...

版权声明：原创作品，允许转载，转载时请务必以超链接形式标明文章原始出版、作者信息和本声明。否则将追究法律责任。http://blog.csdn.net/topmvp - topmvpIncluding a tutorial on how to use data structures and algorithms and a reference for implementation using VB...