The .NET framework 4.0 CTP has just been released, and I think it’s a good time to explore the new features of C# 4.0. In this post, I will introduce about the following features: dynamic lookup, generics covariance and contravariance support, optional and named parameters.

If var in C# 3.0 brings about type inference for local variables with the purpose of saving a couple of key strokes, dynamic lookup adds much more to the dynamicity of the C# language. When you declare a variable with dynamic , all of its method invocations or member accesses will be resolved at runtime. For example, let’s look at the following code:

In the code, we create a string object, and instead of assigning it to a variable of type string , we assign it to a variable declared as dynamic . This basically instructs the compiler to not attempt to resolve any method call or member access of the declared variable. Instead, all these resolutions will happen at runtime. That being done, the next line in which we invoke a non-existing method with an arbitrary parameter will compile just fine into CIL. At runtime, when the method call is resolved and the runtime finds that there’s no such method in the runtime type (which is a System. String ), an exception is thrown. That being said, if we use a valid method, then there would be no exception and the code will run fine till completion. For example:

We basically create two anonymous types, for the sake of convenience, both having a property called ID, and then instantiate objects out of these types. We then pass each of these two objects to the method PrintID, which accepts a dynamic object and prints out the ID property. The code will print out “111” and “101”, respectively. And yes, we’ve just seen duck typing in action. In C#.

That example also implies an interesting usage of dynamic with regard to anonymous types. Now, we can pass objects of anonymous types out of their declaration scope (e.g., the method) and still be able to invoke their methods or access their members without resorting to verbose Reflection code.

We are not just limited to making statically typed .NET objects become dynamic, we can use this dynamic lookup feature to conveniently interact with “actual” dynamic objects available through the Dynamic Language Runtime (DLR) included in .NET framework 4.0. In fact, we can implement such dynamic objects in C# by implementing the System.Scripting.Actions.IdynamicObject interface, which is also part of the DLR. Regardless of the actual receiver of dynamic dispatch, the usage of dynamic lookup is exactly the same from the caller’s perspective.

Some of you might wonder what code the compiler generates and whether there is any change to the CLR to support dynamic lookup or not. To answer that question, let’s look at the CIL generated from the very first code fragment of this post. (Click on the image to see the full size.)

The generated CIL is pretty verbose, but a skim through it reveals two important things. Firstly, our “dynamic variable” turns out to be a plain old CLR System. Object instance. And secondly, there’s no new CIL directive or opcode to support dynamic lookup. Instead, dynamic resolution and invocation is completely handled by framework code. In fact, the above CIL is equivalent to the following C# code, but now, without the dynamic keyword.

(In fact, I simplified the code a bit so that it can fit in one method. The actual CIL generated does have a check at IL_000c , which basically looks at the callSite static field of a nested class, which is generated automatically by the compiler to see if it’s null or not before going ahead and initializing it. In order words, the callSite is cached for subsequent invocations of the same method.)

So, there’s really no magic behind the dynamic keyword. What the compiler basically does is generate some payload containing the information about the invocation so that it can be made at runtime. If there’s any magic at all, it would be in the static method CallSite.Create() which uses Reflection to invoke the NotExistingMethod on the given object if it’s not an instance of IDynamicObject .

Now, we know that a “dynamic object” is actually a plain old object; it should explain why a method can accept dynamic parameters. It should also be of no surprise to know that dynamic lookup can also be applied to the return value of an instance/static method or an instance/static field. After all, unlike the var keyword which requires the compiler to infer the exact type at compile time, the compiler in dynamic lookup scenarios can simply pick System. Object as the type.

To understand why pre-4.0 C# disallows covariance and contravariance, let’s look at some code:

The code in line 2 can be error-prone. Consider what we can write after line 2, assuming it is allowed:

// BOOM: we're adding an arbitrary AnyObject to what,

On the other hand, if C# supported contravariance, we could have written the following problematic code:

// BOOM: we're getting an arbitrary object thinking it’s a string

Due to this invariant restriction, although for the good purpose, we can’t easily reuse variables and methods to respectively get assigned to or accept various generic types. It’s somewhat unfortunate because the key thing to realize is that covariance is fine as long as GenericType < T > does not have any method or member accepting arguments of type T (e.g., if we can’t add a bunch of objects into the objList , which is indeed an instance of List < string > , we’ll be safe). Besides, contravariance is just as safe if T does not appear in any return value from a member or method (e.g., if we can’t get any string out from strList , which is indeed an instance of List < object > , we’ll be safe).

Let’s look at an example. We have a Generator delegate which basically returns random instances of objects of a certain type (e.g., string ). Its declaration is as follows:

Because this delegate does not take in any T as its argument, we can safely make it covariant on T . And indeed, the compiler will allow us to do so by adding the modifier out before the type parameter. However, if this delegate is declared as, say, delegate T Generator<out T>(T seed) , then the compiler will complain since it’s no longer safe for covariance. Now, let’s look at the usage:

// Below line is compiled now because Generator<string> is

// subclass of Generator<object> under covariant rule

// Downcast is also allowed for the same reason

Note that although the above examples show how to declare covariance and contravariance for delegate types, it’s not different to do so with interfaces.

Before we finish with covariance and contravariance, let’s look at what code the compiler generates. After all, we know that the compiler must encode something to the CIL to denote covariant and/or contravariant generic types so that they can be consumed properly by client code. And, this is what the definitions of our Generator and Converter delegates are when viewed from ILDASM.

Do you notice anything? Those little minus and addition signs are used to denote contravariance and covariance, respectively. And interestingly enough, it turns out that the CLR has been supporting such CIL since the introduction of Generics in .NET 2.0. Therefore, it’s possible to write CIL using covariance and contravariance under .NET 2.0+. Only by now is it possible to do so using C#.

A final thought about this feature. While this is a good enhancement to the language, I like the generics covariance/contravariance implementation, enabled via wildcards, in Java, better for its flexibility. Anyway, let’s just be happy with it for now, we can’t have everything.

The last two features of C# 4.0 that we’ll discuss about are optional parameters and named parameters. These features have been with VB.NET since forever, and I’m glad they are finally implemented in C#.

Now, you can invoke this constructor with any of these calls:

How exactly does C# implement this feature? If we look at the CIL generated for this code, we’ll see there’s no magic at all. Basically, the default values will be injected to the call site so that the method invocation happens normally. Here’s the CIL generated by the compiler: 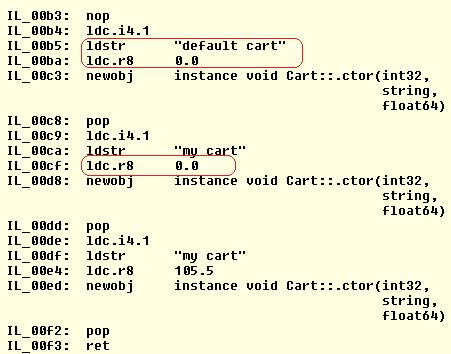 Notice the .param directive which basically tells the compiler about the default values for the optional parameters. These parameters are also annotated by the [opt] attribute.

Now, let’s say we want to call the Cart ’s constructor with the ID and amount specified but not the name , how would we do that?

To avoid ambiguity (for example, when two optional parameters are both strings), C# won’t allow us to simply skip a parameter like this:

An approach C# could take is to allow this syntax:

However, this looks terrible enough with just one missing parameter, much less than with more of them. (How do you like to read this code: MethodWithManyFields(,,, 15 ,,"param",,) ?)

For this particular situation, named parameters is an excellent solution:

One approach is to create a builder to create an instance of such a class. For example:

This will make the code more explicit about what values are to be assigned to what fields. However, the drawback is that we need to implement a builder class, which is quite a tedious task if we have to repeat that for many classes in our application.

With C# 3.0, it’s not that bad because we can use an object initializer to do something like this:

This looks good, but we have to define all the necessary properties for it to work, which is also a tedious thing to do if we don’t really need properties for the class, or if the class itself is immutable.

With named parameters, we have a very nice solution without having to write any builder or property if we don’t want to. (Note the semicolon after the field name.)

// The below does the same thing

Regarding the implementation of this at the CIL level, the compiler is smart enough to infer the correct argument order and simply perform a plain old method invocation.

That’s it. The key features of C# 4.0. I am personally glad that C# has come to support these. Some people say that C# has become so complex and has started losing its original beauty. While I can understand that view, I think the situation is not that bad. While it’s obvious that C# has more and more constructs to support functional and dynamic programming, the statically typed nature and the old constructs of the language are still there, and no developer is forced to use the new features if they don’t need to. On the other hand, these features bring more options for those who need them, and I’d rather have more options than to be handcuffed.

IntroductionWelcome to this installment of the .NET Nuts &amp; Bolts column! When it comes to tips and tricks there are many items that can be considered. For this article we'll briefly recap the ...

An Overview Of The New Services, Controls, And Features In ASP.NET 2.0

A comparison of C# vs. java

How to transfer data to an Excel workbook by using Visual C# 2005 or Visual C# .NET