The decomposition of a simple polygon into triangles is called a triangulation of the polygon. A fact from computational geometry is that any triangulation of a simple polygon of n vertices always has n-2 triangles.Various algorithms have been developed for triangulation, each characterized by its asymptotic order as n grows without bound. The simplest algorithm, called ear clipping, is the algorithm described in this document. The order is O(n2). Algorithms with better asymptotic order exist, but are more dificult to implement. Horizontal decomposition into trapezoids followed by identification of monotone polygons that are themselves triangulated is an O(n log n) algorithm [1, 3]. An improvement using an incremental randomized algorithm produces an O(n log* n) where log* n is the iterated logarithm function [5]. This function is effectively a constant for very large n that you would see in practice, so for all practical purposes the randomized method is linear time. An O(n) algorithm exists in theory [2], but is quite complicated. It appears that no implementation is publicly available.

An ear of a polygon is a triangle formed by three consecutive vertices Vi0 , Vi1 , and Vi2 for which Vi1 is a

convex vertex (the interior angle at the vertex is smaller than π radians), the line segment from Vi0 to Vi2 lies completely inside the polygon, and no vertices of the polygon are contained in the triangle other than the three vertices of the triangle. In the computational geometry jargon, the line segment between Vi0 and 2 Vi2 is a diagonal of the polygon. The vertex Vi1 is called the ear tip. A triangle consists of a single ear, although you can place the ear tip at any of the three vertices. A polygon of four or more sides always has at least two nono verlapping ears [4]. This suggests a recursive approach to the triangulation. If you can locate an ear in a polygon with n ≥ 4 vertices and remove it, you have a polygon of n - 1 vertices and can repeat the process. A straightforward implementation of this will lead to an O(n3) algorithm. With some careful attention to details, the ear clipping can be done in O(n2) time. The first step is to store the polygon as a doubly linked list so that you can quickly remove ear tips. Construction of this list is an O(n) process. The second step is to iterate over the vertices and find the ears. For each vertex Vi and corresponding triangle <Vi-1,Vi,Vi+1> (indexing is modulo n, so Vn = V0 and V-1 = Vn-1), test all other vertices to see if any are inside the triangle. If none are inside, you have an ear. If at least one is inside, you do not have an ear. The actual implementation I provide tries to make this somewhat more efficient. It is sufficient to consider only reflex vertices in the triangle containment test. A reflex vertex is one for which the interior angle formed by the two edges sharing it is larger than 180 degrees. A convex vertex is one for which the interior angle is smaller than 180 degrees. The data structure for the polygon maintains four doubly linked lists simultaneously, using an array for storage rather than dynamically allocating and deallocating memory in a standard list data structure. The vertices of the polygon are stored in a cyclical list, the convex vertices are stored in a linear list, the reflex vertices are stored in a linear list, and the ear tips are stored in a cyclical list.

The ear at vertex 4 is removed. The next triangle in the triangulation is T1 = <2, 4, 5>. Figure 3 shows the reduced polygon with the new edge drawn in blue.

The ear at vertex 5 is removed. The next triangle in the triangulation is T2 = <2, 5, 6>. Figure 4 shows the reduced polygon with the new edge drawn in blue.

Figure 4. The right polygon shows the ear <2,5,6> removed from the left polygon.

The adjacent vertex 2 was convex and remains so. It was not an ear, but now it becomes one. The adjacent vertex 7 was reflex and remains so. The reflect list R does not change, but the new ear list is E = {9, 2}(added vertex 2, removed vertex 6). The ear list is written this way because the new ear is added first before the old ear is removed. Before removing the old ear, it is still considered to be first in the list (well, the list is cyclical). The remove operation sets the first item to be that next value to the old ear rather than the previous value.

The ear at vertex 9 is removed. The next triangle in the triangulation is T4 = <8, 9, 0>. Figure 6 shows the reduced polygon with the new edge drawn in blue.

The ear at vertex 0 is removed. The next triangle in the triangulation is T5 = <8, 0, 1>. Figure 7 shows the reduced polygon with the new edge drawn in blue.

Both adjacent vertices 8 and 1 were convex and remain so. Vertex 8 remains an ear and vertex 1 remains not an ear. The reflex list remains unchanged. The new ear list is E = {2, 8} (removed vertex 0).

Finally, the ear at vertex 2 is removed. The next triangle in the triangulation is T6 = <1, 2, 7>. Figure 8 shows the reduced polygon with the new edge drawn in blue.

At this time there is no need to update the reflect or ear lists since we detect that only three vertices remain. The last triangle in the triangulation is T7 = <7, 8, 1>. The full triangulation is show in Figure 9.

Figure 9. The full triangulation of the original polygon.

3 Polygons with a Hole

The blue vertices are mutually visible. We can convert this to the topology of a simple polygon by introducing two coincident edges connecting the blue-colored vertices. Figure 11 shows the two new edges, one drawn in blue and one drawn next to it in red. The edges are coincident; drawing them as shown just illustrates there are two edges.

Figure 11. The polygon hole is removed by introducing two new edges that “cut” open the polygon.

One such algorithm is the following. Search the vertices of the inner polygon to find the one with maximum x-value. In Figure 10, this is V16. Imagine an observer standing at this this vertex, looking in the positive x-direction. He will see (1) an interior point of an edge or (2) a vertex, an interior point of an edge being the most probable candidate. If a vertex is visible, then we have a mutually visible pair.

Consider, though, that the closest visible point in the positive x-direction is an interior edge point, as illustrated in Figure 12.

Figure 12. The closest visible point is an interior edge point. 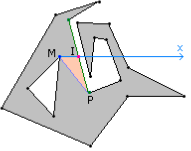 Let M be the origin of the ray (in the example, V16). The ray M + t(1, 0) is shown in blue. The closest visible point is shown in red, call this point I. The edge on which the closest point occurs is drawn in green. The endpoint of the edge that has maximum x-value is labeled P. The point P is the candidate for mutual visibility with M. The line segment connecting them is drawn in purple. The triangle <M, I, P> is drawn with an orange interior.

In 12, P is indeed visible to M. Generally, it is possible that other edges of the outer polygon cross the line segment <M, P>, in which case P is not visible to M. Figure 13 shows such a situation. 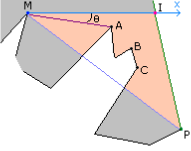 The algorithm is summarized as:
1.Search the inner polygon for vertex M of maximum x-value.
2. Intersect the ray M + t (1, 0) with all directed edges <Vi, Vi+1> of the outer polygon for which M is to the left of the line containing the edge (M is inside the outer polygon). Let I be the closest visible point to M on this ray.
3. If I is a vertex of the outer polygon, then M and I are mutually visible and the algorithm terminates.
4. Otherwise, I is an interior point of the edge <Vi, Vi+1>. Select P to be the endpoint of maximum x-value for this edge.
5. Search the reflex vertices of the outer polygon (not including P if it happens to be reflex). If all of these vertices are strictly outside triangle <M, I, P>, then M and P are mutually visible and the algorithm terminates.
6. Otherwise, at least one reflex vertex lies in <M, I, P>. Search for the reflex R that minimizes the angle between (1, 0) and the line segment <M, R>. Then M and R are mutually visible and the algorithm terminates. It is possible in this step that there are multiple reflex vertices that minimize the angle, in which case all of them lie on a ray with M as the origin. Choose the reflex vertex on this ray that is closest to M.

A polygon may have multiple holes (inner polygons). The assumptions are that they are all strictly contained by the outer polygon and none of them overlap. Figure 14 shows such a polygon. 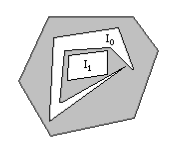 Figure 15 shows a tree of nested polygons that has been triangulated using ear clipping. 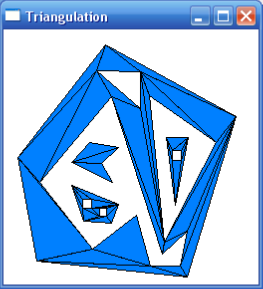 The tree and its nodes are abstractly shown here:

The pseudocode for processing the tree is

The function MakeSimple encapsulates the algorithm described previously for finding two mutually visible vertices for an outer and an inner polygon, and then duplicates them and inserts two new edges to produce a simple polygon. The process is repeated for each inner polygon.